September 30, 2021 – Akron, OH – Don Taylor, President and CEO of Welty Building Company, has been named the National Sales and Marketing Executives™ (NSME) 2021 Executive of the Year, NSME’s highest honor award.  The winner is selected by NSME leaders based on nominations from local professionals. Criteria for the Executive of the Year include:  outstanding leadership of a dynamic and growing organization, significant corporate achievement, community and civic involvement and be a recognizable figure in the greater Akron/Canton and surrounding areas for his/her contributions.  Don Taylor and other NSME award recipients will be recognized at the “Accent on Excellence Event – 2021,” on September 30th at The Tangier in Akron.  For more information, visit NSME. 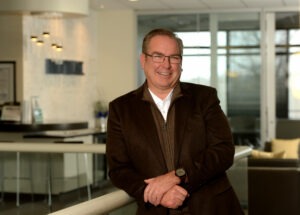 “As a consummate businessman, a strong community supporter and a good friend, there is no one more deserving of the NSME 2021 Executive of the Year honor than Don Taylor,” stated John G. Morikis, Sherwin-Williams Chairman, President and Chief Executive Officer. “Don has demonstrated to me over the years a steadfast commitment, solid business acumen and sharp objectivity that he brings to every project and cause for which he is involved. The business community, and his family and friends, are better off for these and so many other positive attributes associated with Don.”

“Recognizing Don Taylor as the NSME 2021 Executive of the Year is a deserving honor,” said Bill Considine, Chief Executive Officer – Emeritus, Akron Children’s Hospital. “Don is a champion of the community and he has served in a variety of leadership positions. His term as Chairman of the Greater Akron Chamber was a transformational term. He embraces innovation of being a continuous learner. His networking skill set finds opportunities routinely that enhance our communities.

Don Taylor began his work as a developer in 2005. Don teamed up with Rick Fedorovich to create the office space at 3421 Ridgewood Road. Having both grown their companies significantly, they needed more space and desired a more efficient building. Using Taylor’s construction knowledge and Fedorovich’s accounting insight, they finalized the design and financials to bring this high-performance office space to life. In 2007, right on the heels of the move-in on Ridgewood, Don was approached by Bill Ginter about saving a historical building in downtown, the Old Akron Post Office. The city had plans to build a transportation station completely surrounding the building, which would have inevitably secured its doom. Don and Bill went into action, proposing alternatives for the city and even congress to evaluate for the transportation hub that eventually received approval. The Post Office was transformed by a $35 million development deal and the space was leased to Summa and LTEC.

Fast forward to 2020, Don’s development portfolio continued to expand and reached the stage of needing additional professional oversight and drive. And to make sure all the skills of our economic, construction, furniture, and facilities groups were being harnessed together to facilitate better deals, Don created Welty Development Company (WDC). Knowing Tom Charek’s well-respected reputation and proven track record for putting together successful projects, Don elected Tom as WDC’s president.

About Welty Building Company
With offices in Akron and Cleveland, Ohio, Welty Building Company provides professional construction management services, specializing in Lean Construction, for clients in a variety of healthcare, commercial, education, energy, mission critical and hospitality markets nationwide. Since 1945, Welty has delivered extraordinary building experiences by never being afraid to do what’s right.   Welty has created many prestigious community assets, including the new Sherwin-Williams global headquarters, world-renowned Goodyear® Tire & Rubber Company’s Global Headquarters, a multi-phased expansion to the Pro Football Hall of Fame, Kay Jewelers Pavilion at Akron Children’s Hospital, the City of Akron’s Ohio Canal Interceptor Tunnel, numerous academic buildings at The University of Akron and many others.