After nearly 12 years of vacancy, the former Cleveland Athletic Club (CAC) at 1118 Euclid Ave. will soon come alive again as the Athlon at the Cleveland Athletic Club Building. The building will feature 163 luxury apartments, offices, and commercial retail space—all paying homage to a facility loved by Clevelanders since the CAC first opened its doors in 1911, then abruptly closed in 2007.

J&S Management is currently pre-leasing the 163 apartments and suites in the historic building, with tenants moving into the second and third floors by the first of February and all tenants taking occupancy by March.

“Partial occupancy is imminent by the end of the month,” says Joe DiGeronimo, vice president of Precision Environmental. DiGeronimo first started working alongside a group of development partners (including Don Taylor 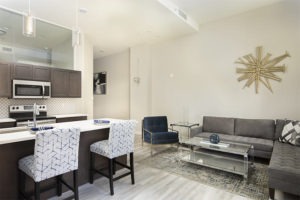 and Welty Building Company, Ned Weingart, the Bobeck Family, Great Lakes Financial, and New York-based Whitestone Realty Capital) in 2011 to acquire the vacant building. After acquiring it in 2016, they embarked on a $62 million cleanup and renovation endeavor last year.

The group says potential residents and nostalgic Clevelanders alike have been following Athlon’s transformation closely. Athlon management assures visitors that they have kept the historic charm of the original CAC while also incorporating modern-day amenities.

“Interest has been great,” says Tina Vespucci, vice president of J&S Management (a division of The Great Lakes Companies, owned by the Bobeck family). “The amount of past CAC members coming in is phenomenal. People are so in love with the building. We probably give six tours a week.”

The remnants of the 15th floor bowling alley have been salvaged, although not re-purposed in the Athlon. “We have them for some purpose to be determined,” says DiGeronimo.

Vespucci says one woman even donated a box of CAC memorabilia she had saved from when her father was president of the club, and they are currently looking for a way to incorporate the memorabilia into the décor.

The developers were able to save the iconic CAC logo and rework it into a new logo for the Athlon. “The building itself will always be the Cleveland Athletic Club,” says Vespucci. “We considered 10 different names, and we took a deep dive into Cleveland history and Cleveland Athletic Club history.” She adds that the word “athletic” stems from the Latin word “Athlon,” which translates into “contest” or “prize.”

“The history [of the building] is surrounded by fitness and wellness,” Vespucci explains of the name choice. “Athlon said we are the Cleveland Athletic Club, but we didn’t want to be too trendy. [We want to] stand the test of time. When we did the demolition and looked back at all the things that happened in there, such as [former CAC director and boxing legend] Jimmy Lee, it felt like the right thing to do. We’re keeping the history [intact].”

“We do not price anything we don’t show,” she explains. “All of the floor plans are so unique, we make sure to walk the suite.”

The apartments are on the second through sixth and eighth floors, while the 10th floor features 23 two- and three-level suites. The three-level units are located throughout half of the former basketball court. 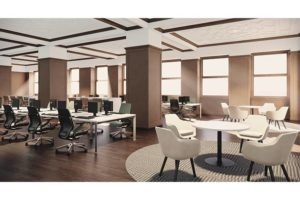 While one side of the building offers views of Lake Erie, the views from the three-level suites look directly onto home plate at Progressive Field.

Resident amenities include the historic pool on the 12th floor—the same one in which 1920s Olympic swimmer and gold medalist Johnny Weissmuller once hit a record for the 150-yard backstroke (although the deep end has been leveled off to just five feet deep and the track overlooking the pool has been restored). The 1950s ceiling and light fixtures have been restored to their original glory.

“We’re lucky to have an indoor pool as part of this project,” says Vespucci. “The pool makes it so special.”

The 12th floor also features men’s and women’s locker rooms, wellness and yoga studios, and a 3,000-square-foot fitness room. Vespucci reports they are considering opening the facilities to the public for a fee, but no decision has been made.

The three eighth-floor parlor rooms have been converted into community spaces. Each room has a theme—with one room being a theater room, a second lounge room set to offer amenities like pool tables or poker tables, and third parlor to be used as a kitchen for local chef demos and wine tastings.

A 15th floor rooftop deck provides an outdoor community area with sweeping views of downtown and the street below. On a clear day, you can see all the way to Forest Hill, the Lincoln Electric turbine, and even Eastlake’s power stack to the east. 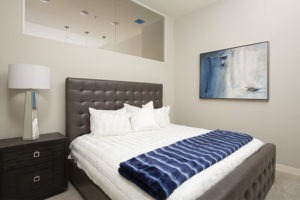 The historic seventh-floor grand ballroom has been reserved for office space, which is being leased by commercial real estate firm CBRE. DiGeronimo says the space can accommodate one tenant, perhaps two, in up to 9,000 square feet. “Ideally, we’d like one tenant,” he says. “We could divide it into two collaborative spaces if they are working together. We’ve talked to some very talented, capable professional firms that are very well-respected in our town.”

CBRE also continues to look for the perfect tenants to fill the first-floor commercial space, which Vespucci says can house one large tenant or up to three smaller tenants in 10,000 square feet.

In addition to the first-floor commercial space, residents will be greeted by the Athlon’s historic lobby, which will include the leasing offices, a business center, mailboxes and package room, bike storage area, and a dog washing station.

Both DiGeronimo and Vespucci see the Athlon as a huge asset to the Euclid Corridor’s renaissance. “The vision among all property owners in this section of Euclid is to make it an exciting retail destination for downtown,” DiGeronimo says. “It’s a good thing for everyone.”

DiGeronimo adds that the Downtown Cleveland Alliance has been helpful in making the vision come alive. “I don’t think this project would’ve taken place if it weren’t for Joe Marinucci and Mike Deemer.”

Vespucci also has the vision. “The next five years the Euclid Avenue Corridor is going to be a site to be seen,” she says. “All good things are coming to this corridor.”