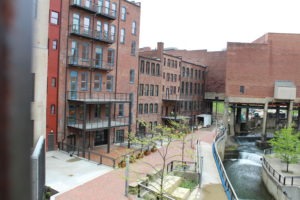 A live-work-play project in downtown Akron in which the Greater Cleveland Partnership has invested has started leasing 40,000 square feet of retail and office space, some of which faces the Ohio and Erie Canal.

The project marks the first time the GCP has invested in a project outside Cleveland and Cuyahoga County and it could deliver $245 million in economic impact and more than 2,000 jobs.

“The Bowery project is indeed catalytic and will be the keystone project for all future downtown Akron development,” said Akron Mayor Dan Horrigan, in a statement.

“We quickly recognized how important this development will be for the entire Northeast Ohio region,” said Steve Luca, managing vice president of Cleveland Development Advisors, in a statement. “This project is a watershed moment for Akron and could lead to future collaboration in how we reshape Northeast Ohio.”

The Bowery District is being heralded as the most important economic development project in Akron in decades.

Three University of Akron and Kent State University economics professors said in a report titled The Economic Impact of the Bowery Project in Downtown Akron that the project could have an economic impact of $245 million and add more than 2,000 jobs in 20 years.

The Akron office of Cushman & Wakefield | CRESCO Real Estate has been chosen as the leasing agent for the retail and office space in the development, called the Bowery District, which is located along the southwestern corner of South Main and West Bowery streets.

“Our role is helping introduce the project to the community so businesses, when making location decisions, know this is an opportunity for them,” said Nate Kelly, president and managing director of Cushman & Wakefield | CRESCO, the commercial real estate firm with offices in Cleveland and Akron.

The redevelopment of the Landmark, Day-Klein, Osterman, Standard Savings and Whitelaw buildings, plus an unnamed building, comprises 92 apartments — most in the Landmark Building but some in the Day-Klein and Osterman buildings — as well as 36,000 square feet of retail space and 4,000 square feet of office space. Space costs between $15 and $20 per square foot per month.

Most of the apartments and retail/office spaces face either South Main Street — the front of the buildings — or Lock 4 of the Ohio and Erie Canal — the back of the buildings.

The canal side of the buildings offers brick-paved patios for retail stores and restaurants that connect them to the canal and its towpath trail system, as well as the Akron Civic Theatre, Lock 3 Park entertainment area, and Canal Park, the baseball stadium for the Akron Rubber Ducks, the minor-league affiliate of the Cleveland Indians.

“If you only see the front of the building, you’re missing the community contact point,” said Chris Burns, chief operating officer for Welty Building Co., the Fairlawn, Ohio-based company that led the reconstruction of the Bowery District and is part of the project’s ownership group. A Welty affiliate also will manage the property.

Many developers have tried to redevelop the vacant and blighted block between the Civic Theatre and Cascade Plaza for two decades, Burns said.

“How can you develop one of those buildings economically?” he asked. “Who would take a risk without knowing what the other buildings would do? They share walls. The risk has always been too much.”

But then Welty’s president and CEO, Don Taylor, an Akron native, and a mix of public and private partners joined to redevelop all six buildings at one time.

A 15-year tax abatement with Akron will allow the district owners to be more competitive with rents, Welty’s Burns said. The tax abatement won’t kick until two more buildings are completed, he said.