Talk about a turnaround.

Construction contractor concerns about future building prospects that took center stage in the pandemic’s peak have melted away as the building market regained its footing with resurgent hospital building projects and continued commercial realty development.

Dominic Ozanne, president and CEO of Ozanne Construction Co. of Cleveland, said, “You have a mix of projects around town that cost $100 million that we’ve never had before. And then a few miles south you have the Intel Corp. (chip manufacturing) project kicking off (near Columbus). This is one of those times when everyone in Cleveland building will have good things to say about the economy.”

It’s a construction scene unlike any Ozanne has seen since 1980, when he joined the family business.

The sentiment is widespread, according to the Marcum accounting and advisory firm’s annual survey of Northeast Ohio construction contractors and subcontractors. Just 5% of the respondents to the 2022 survey worry about a lack of work threatening their business over the next year, a big switch from the 2021 survey, when 29% saw that as their biggest threat.

Likewise, backlog — the amount of work contractors have won but not started — is high, with fully 60% of the companies reporting a larger backlog than in the past.

Roger Gingerich, the Solon-based leader of Marcum’s Midwest construction practice, said the survey shows “we may not be over COVID-19, but clearly the worry over the lack of work is gone. It’s back to an increase like we’ve seen since 2014, except last year.” He noted the survey was circulated before the Fed began hiking interest rates to combat inflation and recession worries sprang up.

However, a long-term worry about securing skilled labor zoomed back to the top of contractor concerns.

The survey showed 33% of the respondents see securing skilled labor as the top threat to their business, up from 24% in 2021. Gingerich noted that concern about labor was not a question that the firm queried contractors about in 2014, when the survey began.

Competition for construction executives and labor in the building business is intense. Most participants in the survey indicated they have raised pay to recruit and retain staff. Just 3% said they have not, and 14% said they have hiked pay by more than 8%.

“It’s a war,” Ozanne said, noting he expects the competition for labor to grow as the Intel project gets going.

“We’re already seeing it,” Ozanne said. “There are hiring bonuses. And if you don’t agree to let a younger executive have the option to work from home, you won’t be able to hire him.”

Tim Lavelle, CEO of the Gorman-Lavelle plumbing firm in Cleveland, predicts that when the Intel project gets in full swing, it will “empty plumbers union halls all along I-71 from Columbus to Cleveland. The market is going to demand more tradespeople than it has.”

Lavelle said the plumbers union is losing retirees and is not replacing them at the same pace.

“We see the work is out there and are trying to grow the head count with sensitivity to recruiting women and minorities,” Lavelle said. “But it’s a five-year apprentice program. It doesn’t happen overnight.”

Although plumbing “hasn’t changed in a thousand years,” Lavelle said, heating, ventilation and air conditioning now are knowledge-worker trades because “there is a digital aspect to everything.” Likewise, he said, staffers with skills in computer design, typically building information modeling systems, are hard to keep as they get offers of raises and move on.

The redeeming feature, he emphasized, is the vast number of projects in the region, from those the Cleveland Clinic is undertaking at its main campus and other loc 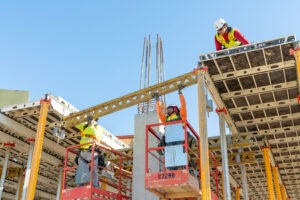 ations to the MetroHealth system adding projects in the suburbs and Sherwin-Williams Co. building a new downtown headquarters and a research center in Brecksville.

Don Taylor, president and CEO of Welty Building Co. in Fairlawn, said it’s a time when he follows advice he got years ago: “Contractors don’t die from starvation. They die from gluttony. They take on too much work and risk when the market is strong. We’re trying to be smart about how we handle opportunities out there. We’re staying focused on our customers and their projects.”

The caution is well-placed. Welty is a partner with Gilbane Building Co. on the Sherwin-Williams projects, which will cost more than $600 million to construct.

Welty’s approach to the labor shortage is to work smarter, Taylor said, and employ techniques of lean construction the industry has borrowed from manufacturers to eliminate waste. That also helps with a less-experienced workforce, he said.

Although Taylor quips that “almost everything is different today than in the past,” he and others note efforts to secure construction materials are taking more attention and time than in the past.

In Marcum’s survey, 25% of the respondents consider material costs the biggest threat to their business, compared with 15% a year ago. Material price volatility is listed as the top political issue facing their businesses this year.

“There’s no longer a big red easy button for construction materials,” Taylor said. “We spend an exponential amount of time on the logistics of materials, so they don’t have an impact on the project. Now you think about which items come in on containers or have to go through customs.”

A standard light fixture used to take no more than three weeks to receive, Taylor said, but the same item now takes at least 26 weeks to arrive. The reason: the fixture contains a computer chip. Even a simple light-switch plate is tough to get in the volumes contractors need them.

Jason Jones, general manager of Turner Construction Co.’s Cleveland office, said planning for materials almost means working backward, as staffers count back from when they are needed to order them.

“You order and wait,” Jones said. “In the past, we have been able to source labor when it’s needed. We have seen more schedules slip on material issues than labor issues.”

Although Jones feels a plethora of projects surfaced for contractors this year, and he expects next year also will be strong, he worries about the prospect that rising interest rates will slow down activity.

“We have had a few jobs delayed already while the owners look for or wait for better interest rates,” he said.