‘Beauty out of the ashes:’ Uniontown couple forges ahead with relapse preventon and wellness center in Lakemore

LAKEMORE — Shelly and Travis Bornstein on Friday took another step toward opening a relapse prevention and wellness center named for their son, Tyler, who died of an overdose on the same date four years ago.

“Basically, it’s kind of beauty out of ashes for us,” Shelly said this week. “This day is the day and it’s never going to stop hurting, but if we can make a difference, Tyler lives on, as do others.”

Workers Friday began clearing the site of the former Edwin Shaw Hospital off of Sanitarium Road for construction of both Tyler’s Redemption Place and Restore Addiction Recovery.

Tyler’s Redemption Place — which will include everything from a gym and space for art therapy to a cafe and amphitheater — is aimed at keeping people sober and mentally healthy after they’ve left rehab and also will be open to the public. With its emphasis on wellness programs, it’s the first of its kind in the state.

The Restore Addiction Recovery facility will be a 70-bed treatment center for men, who have been the hardest hit during the opioid crisis. Instead of the typical 30-, 60-, or 90-day treatment, residents will live at the recovery center a full year. 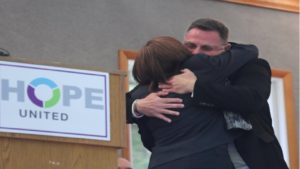 The two faith-based projects are separate, launched by unrelated nonprofits — one in Uniontown, the other in Hudson. Each group has raised more than $1 million, but still needs to raise millions more to begin construction. They’re working together to clear the 10.5 acre-site they will share.

Summit County officials donated the land to the nonprofit groups amid the ongoing and evolving opioid crisis, hoping the projects could save lives.

Between Sept. 20 and Sept. 27, at least 35 residents sought emergency room help after overdosing, according to the latest numbers released by Summit County Public Health.

Nearly 60 percent of those were men. More than 90 percent were white. And combined, their average age was 38.8.

Tyler Bornstein was 23 when he died of a heroin/fentanyl overdose.

His parents, who live in Uniontown, said he became addicted to drugs, like most people — after a physician prescribed opioids for pain. Tyler’s pain came after two surgeries on the same arm he broke four times.

The Bornsteins said they exhausted their health insurance and their bank accounts to help him, but said each time he came out of rehab, Tyler would relapse after about six or seven months of sobriety.

That’s not unusual, Travis Bornstein said, offering these numbers: About 70 percent of people relapse during the first year of so 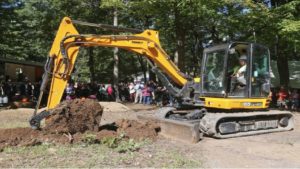 briety. If people maintain sobriety between one and three years, they have about a 34 percent chance of relapsing. But for those who remain sober between three and five years, the chances of long-term sobriety soar to 86 percent.

The Bornsteins spent much of the past two years researching what could have helped their son — and others — maintain long-term sobriety. Then they tried to incorporate which services were not already offered in this area into Tyler’s Redemption Place.

Among other things, the $3.7 million health and wellness center will include:

• A 17,000-square-foot multi-purpose facility with a gym able to seat a couple hundred

• Weight and cardio rooms, plus a multi-purpose gym

• Alternative therapies including yoga and acupuncture

Shelly said the building aims to bring the natural beauty of the campus inside with lots of windows, open space and a two-way fireplace that opens onto the amphitheater.

There’s also a 12-foot by 12-foot room with walls that will be covered in pink Himalayan salt, which some believe helps breathing and promotes healing.

“We’re not trying to create Taj Mahal,” Shelly said. “But when people come, we want them to be proud of this space and know that people care.

Travis said what separates Tyler’s Redemption Place from others is its emphasis on wellness. 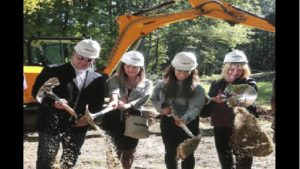 “We think we should be a pain-free society, that popping an aspirin or pill will solve everything, physically, mentally or spiritually,” Travis said. “But life is painful — for everybody. And we need to teach people how to manage stress, to cope.”

The Bornsteins — who founded the nonprofit Hope United (www.hopeunited.life) — said the project will happen, though they’re just now ramping up the fund drive and have raised about 20 percent of the money needed.

“I’ve heard numbers like 50 to 60 percent are failing drug tests,” Travis said. “So let us help. Invest in us and the community and you’ll have employees.”

Ultimately, the Bornsteins said they hope the center not only helps people remain sober, but also breaks down the stigma of addiction and sobriety.

The Bornsteins said they received some push-back about opening the center to the larger community.

“Some said people aren’t going to come and use it,” Travis said. “But listen, you can’t pretend drug addiction isn’t there … it impacts our family and our neighbors.”

Everybody sees the overdose deaths, the Bornsteins said.

“We don’t talk enough about hope,” Shelly said, “and this is about hope.”