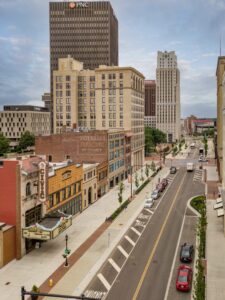 Despite the pandemic, Akron had a busy 2021.

Development downtown continued. The Bowery project started the year with its nearly 100 apartments almost all leased out and its focus on retail tenants. Then the 159 Main building across Main Street opened early in the year, unveiling more than 100 more luxury apartments.

But while residential activity showed little to no weakness during a year that was fraught with pandemic and other perils, business activity downtown and nearby in central Akron was largely stalled.

The city’s new hotel, the BLU-tique, had just opened at New Year’s before it was shuttered for almost all of 2021. It remains closed.

Another hotel, this one proposed for the Martin House, a former mansion on the campus of the University of Akron, was slated to begin construction in 2021, but financing proved impossible to arrange. Tom Chema, who was able to raise millions of dollars and a bounty of support for Cleveland’s Gateway sports complex projects in the 1990s, told us in December that the project still was unable to find backers and remains shelved.

Not that there weren’t signs of hope.

Downtown bars and restaurants reported a significant pickup in business in the middle of the year, and new restaurants such as El Patron downtown reported their business was brisk. Developer Tony Troppe, who built and co-owns the BLU-tique, has said he hopes to reopen soon and expects to do so with a new badge from a major hotel brand.

But those same bars and restaurants that reported a return of their patrons also often had a difficult time finding staff, sometimes leaving them unable to take advantage of improving business. Now, they’re facing another uncertain winter and year ahead as COVID has returned in the last month of the year with a vengeance.

The Bowery, until December, had failed to attract a single retailer, bar or restaurant to its new spaces — though many, including its developer, said that was a blessing in disguise considering the economic climate.

Before the year ended, though, Akron’s glitziest development announced it had landed a major restaurant as its first retail tenant. Crave, one of the city’s most popular restaurants, announced it will move and expand into new digs at the Bowery and move from its home on East Market Street.

Meanwhile, as the nation argued and convulsed over whether to spend trillions of dollars on new infrastructure projects, Akron completed some of its major infrastructure work.

Not only did the city make largely unseen progress underground on its more than $1 billion, federally mandated sewer project, but the city’s big makeover of Main Street downtown made major progress, and the street is now reopened in most of downtown.