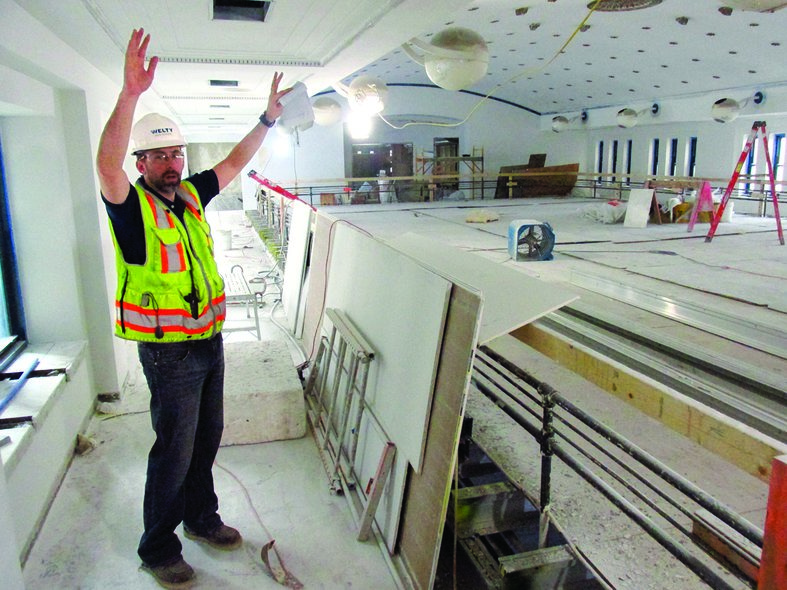 At a place where uncounted victories — and losses — were tallied for decades in the last century, another win will take place the week of April 8 as the first tenants move into new apartments on the second and third floor of the old 15-story Cleveland Athletic Club Building.

In this case, the victory is the first part of a $60 million project to turn the 1911-vintage building to active use a dozen years after its namesake private club closed. It adds 163 suites to the property, rechristened The Athlon, along with a floor of office space and restored storefronts. The building at 1118 Euclid Ave. is scheduled to be completed by late June, a feat achieved by the third group of investors to undertake the challenge.

There was a good reason getting the project funded and built took so long, said Tony DiGeronimo, a principal of President Environmental Co., whose family pitched in to make it a go as part of the project’s ownership with Cleveland Heights investor Ned Weingart and the Bobeck family, which owns Great Lakes Financial Group of Cleveland and the adjoining Huron Square apartment building, 1020 Huron Road.

“This is the most difficult one,” said DiGeronimo. As the operator of Precision, which has handled the cleanup and demolition of old materials in multiple downtown office or hotel to apartment conversions, he should know.

“It had 10 years to deteriorate. We took hundreds of truckloads of debris out of this building,” DiGeronimo said.

He also noted during a Tuesday, April 2, tour that the structure has one of the few pools downtown, which, in this case, cost $1 million to make it usable once more.

Such a measure is part of the drill on this project, however. The top 10 floors of the structure were added atop an existing five-floor office building in 1911 in order to accommodate the already well-established CAC’s varied offerings. The pool, where Olympic swimmer Johnny Weissmuller set a world record for the 150-yard backstroke in 1922, according to “The Encyclopedia of Cleveland History,” had to be lowered to 4 feet from 9 as it was renovated and the arched ceiling above it dropped enough to allow water sprinklers to be installed as part of the project.

The running track also is coming back for another round. Kevin Konczos, project manager for Welty Building Co. of Fairlawn on the project, said the original plaster ceiling over the running track and pool had fallen to the ground. Everything had to be reconstructed, including designs in the plaster. The pipe banister that forms the edge of the running track will also be back, but augmented with an additional two feet of glass banisters to meet current building code and retain the historic look of the place.

However, some things had to go. Basketball courts on the top three floors of the structure were beyond repair. Part of that area is being converted to a fitness center and the remainder to four penthouses of three stories apiece that still are taking shape.

The building’s exterior presented other tests. Large sections of the terracotta front had broken free due to years of winter freezes and thaws, and the terracotta on the northeast corner is largely being rebuilt. Konczos estimates almost 40% of the building’s exterior has required repair and almost $7 million of the renovation cost went into repairing the facade and windows.

Inside, Sandvick Architects of Cleveland had to design 82 different floor plans to make the structure a viable mixed-use building. Some suites have 6-foot-wide windows facing Euclid, while those on the building’s east side offer views of the terracotta on the Halle Building next door. One-bedroom suites on the structure’s northwest corner have windows lining two sides of the units. 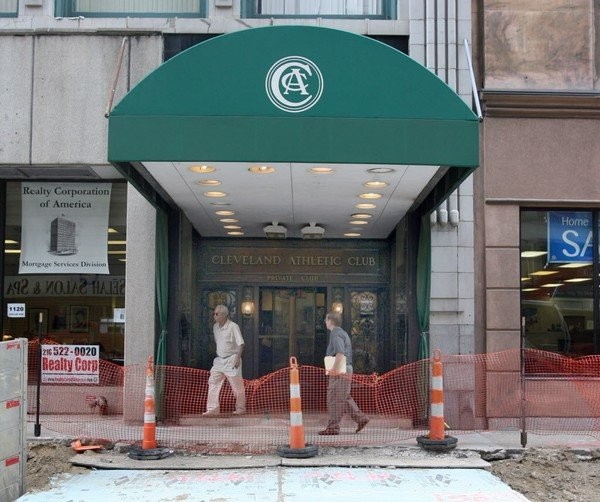 he small units, according to Tina Vespucci, vice president of J&S Management Co., which handles leasing and operations, are designed for young professionals who don’t want roommates. Those units predominate on the eighth, ninth and 10th floors.

The suites have stainless steel appliances, in-suite washers and dryers, and some have dedicated walk-in showers. When master bedrooms in the structure don’t have an outside window, a large interior window allows light in from the adjacent combined kitchen and living room.

Vespucci said about one-quarter of the first 30 suites to be available have been leased, and noted the spring rush for apartment rentals is well underway.

“As of March 1, the phones started ringing constantly,” she said.

Meeting federal standards for historic preservation — a requirement for received state and federal historic tax credits crucial to the project’s financing package — necessitated some interesting changes in the property. The building’s grand ballroom had to be retained as an open space, so the developers are marketing it as 7,000 square feet of office space. Part of the sixth floor, connected by a stairway, will provide a conference center for tenants.

Konczos said office tenants will be able to divide up their space but will have to use glass to retain sightlines of the old ballroom. A stairway in the center of the building, which once let crowds enter and leave the structure’s sporting events, is being restored but will be enclosed with fire-rated glass to meet current building codes, he said.

Jonathan Sandvick, whose Cleveland-based Sandvick Architects specializes in adaptive reuse, said the stairway served as the heart of CAC’s space from the seventh to the top floor.

“As part of a building devoted to fitness, part of the idea was that people would exercise using the stairs. It was also part of allowing clients to transfer from one part of the club seamlessly to another, so it was an ornate space, unlike stairways used for emergencies,” he said.

Old plaques and trophies in the building were too damaged or mold- covered to be kept, but Vespucci said she is fielding calls from people whose grandparents and great-grandparents were club members.

“We’re getting boxes of artifacts that we’ll display,” she said. Those will recall the history of the structure, well remembered for parties, pool, track events, card games and bowling. (The bowling alley was scrapped as beyond repair.)

“It’s been a long time coming,” Yablonsky said of the project. “For certain generations, that building meant a lot. It’s a part of the great period of American clubs when people sought to share a sense of belonging.”

Moreover, Yablonsky said the building is architecturally important because it was designed by J. Milton Dyer, a famous architect in Cleveland who went on to design Cleveland City Hall. The structure has windows of three sizes that grow smaller near the top of the building, which the “Guide to Cleveland Architecture” said is intended to make the tower look taller.

However, a big change greets visitors in the dedicated lobby to CAC on the building’s northwest corner. The old entrance was lined with wood, creating a quiet, stately entrance. Now, the lobby is bright and airy, lined by marble walls. It will also serve as the location for the building’s concierge. Konczos said the wood was not original to the building, but the marble, which survived decades behind the paneling, was.

Workers also found that what they thought was the lobby’s ceiling was actually a dropped ceiling, he added, and the original plaster ceiling was even higher than designers had at first thought.

View As a PDF