How Does a Tunnel Boring Machine (TBM) Work?

One of  Welty’s most unique projects is to provide Construction Management services on the Ohio Canal Interceptor Tunnel (OCIT). The tunnel will serve as the new sewer system for the City of Akron, collecting up to 25.6 million gallons of sewage and storm water during heavy rain events. OCIT is the largest municipal construction project in the history of the City of Akron. The tunnel, which will span 6,240 feet, will be dug by a 325-foot tunnel boring machine nicknamed Rosie. OCIT will help to improve and maintain water quality in the Cuyahoga River.

How is  a tunnel of this size created?  An Article from Tunnel Insider goes  more in depth to how this is done:

It’s widely known that the construction of tunnels is complex. Though tunnels are becoming more common in transportation, most of us undermine the engineering behind them and difficulty of planning and digging them. Thanks to advances in tunneling technology, tunneling has evolved quite a bit in the last century, with the technology being improved every day. Today, massive tunnel boring machines, also known as TBM’s, are highly elaborate construction machinery that are responsible for building some of the worlds most advanced and longest tunnels in the world. 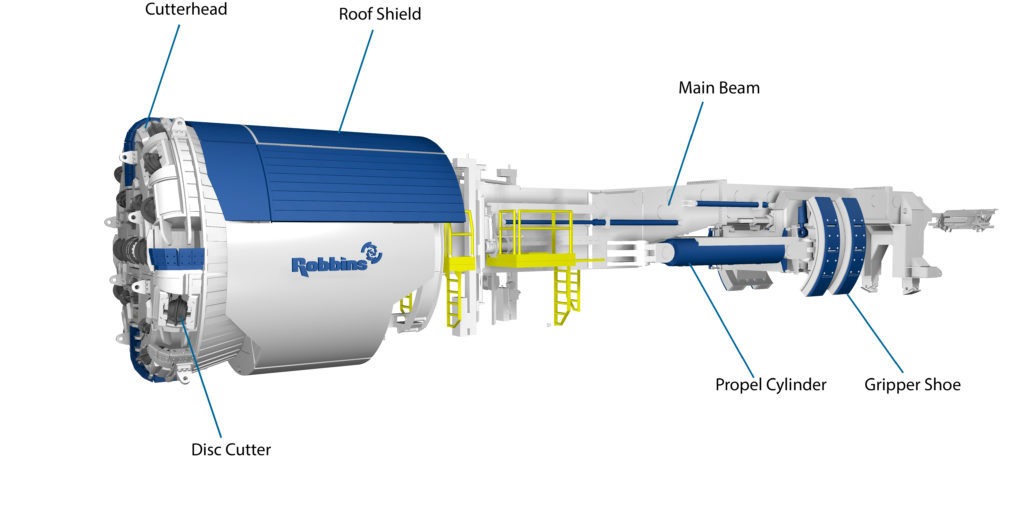 TBD’s make it possible to efficiently and effectively plan, engineer, dig and construct tunnels, a movement that would have been just a wish in an engineers mind not too long ago.So, how exactly do these TBMs work, you may wonder? Well, let’s take a closer look!To simplify things, we’re going to think of TBM’s as being comprised of three parts; the cutter-head (front), the tunnel shield (middle), and the trailing gear (rear).

Though each of these three sections is made up of smaller sections and parts, this serves as a good way to picture this complex machine in general, such as the Robbins below:

Comprised of dozens of steel blades that chip away at the soil ahead as it rotates, the cutter-head which uses disc cutters, sits at the very front of the TBM, does most of the hard work by spinning and digging away at the earth to allow the machine to move forward. The blades (disc cutters) are replaced as needed to keep the TBM progressing at a constant rate.Next comes the tunnel shield (roof shield) and concrete panels aka the mid-section. As the TBM makes progress, it needs an outer shield to protect itself and the workers inside from the surrounding ground.

The concrete panels get installed right behind the shield itself, becoming the outer layer of the tunnel. As the cutter-head makes progress, the panels are picked up and set in place by a rotating vacuum powered lift.While the TBM builds the tunnel, its trailing gear (rear), comprised in some cases of over 300 feet of gear that supports the TBM, excavates the dirt and rock at the same time, making it incredibly efficient. The trailing gear includes a conveyor belt that removes all the soil excavated by the cutter head from the tunnel, which gets longer and longer as the TBM makes progress.

The trailing gear also holds supplies that the operating crew needs to keep the machine moving forward. Sometimes, up to 25 crew members at a time can be needed to operate a TBM. It’s important to note that these are incredibly complex machines, and the above is just a simple overview of the anatomy and basic function of the TBM.

Read the Article on Tunnel Insider by clicking here