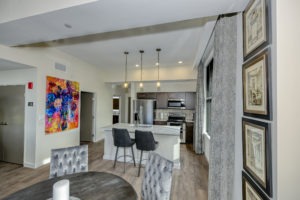 What’s up in downtown Akron? Bowery tenants move in, other projects proceed

Downtown Akron’s hoped-for renewal is moving in and unpacking.

The Landmark Building, part of the $42 million Bowery Project along South Main Street, has its first live-in tenants.

Theresa Bembnister and Constantine Zuev are among the first wave of professionals living in new apartments built in the core of the city, adding to what officials hope will be an ongoing revitalization of Akron. The officials anticipate that the Bowery and other nearby projects will spur further interest in downtown as a place for people to live, work and play.

Zuev and his wife moved from Chicago to Akron in late 2019 after his wife got a job in the area. Both are in their late 30s, work in information technology and emigrated to the U.S. from Ukraine.

Zuev believes he and his wife were the Landmark Building’s second tenants when they moved in in December. They have an upper-floor studio apartment with what he says has great views of Akron.

“This seemed like the perfect choice,” he said. He typically works in their apartment developing mobile apps and more for clients elsewhere in the U.S.

Bembnister, meanwhile, was looking for a place to live that would let her walk to her job as curator of exhibitions at the Akron Art Museum. She had been living in the city’s Highland Square neighborhood for five years.

“I knew I wanted to live downtown,” Bembnister said. “The Bowery was opening up.”

And it is a five-minute walk to the museum.

Bembnister and Zuev say they look forward to construction ending so they can better enjoy where they now live.

What follows is an update on downtown Akron’s significant redevelopment projects.

The multi-building $42 million Bowery redevelopment is the furthest along of the various large-scale downtown projects.

All 92 apartments in the 12-story Landmark Building at Bowery and South Main have occupancy permits, said Don Taylor, head of general contractor Welty Building and a partner in the Bowery development group. Apartments range in price from $1,142 per month for a studio to as much as $3,130 monthly for a three-bedroom, three-bath penthouse. There are 28 different floor plans.

The remaining formerly vacant and blighted buildings that stretch between the Landmark south to the Akron Civic Theatre are being finished, he said.

One of the final pieces, the building next to the Civic, now has a new roof and necessary interior changes to convert it into a small performance venue operated by Civic management, Taylor said.

The Landmark apartments were the first to be completed, although some interior finishing work is still taking place.

“We have 16 leases signed for residences in the building,” Taylor said.

“The retail space is a different story,” he said.

Signing retailers, including a grocer, is behind schedule, he said.

The big sticking point: Retailers have not committed to the ground-level spaces along South Main Street because of the city’s ongoing road reconstruction project, Taylor said.

He said prospective retailers are saying, “When the road is done, call us back and we’ll reconsider,” he said.

According to the city, its Main Street Corridor project is on schedule to be finished in July.

The Bowery development group has reached out to Akron’s International Institute about placing an immigrant family in charge of a new restaurant on the site, Taylor said.

While the lack of retail is a concern, the development group is not panicking, Taylor said.

Taylor said overall he and his partners are happy with the Bowery Project. They also don’t look at the other upcoming downtown building redevelopments as competition but as good additions to downtown Akron, he said.

Interested in renting a suite at the Bowery? Go to www.bowerydistrict.com or call the leasing team at (330) 618-3469.